You are at:Home»Blog»Be Like Steve – 9 Leadership Lessons from Captain America
By Liza on 10th June 2016 Blog, General, Team Building 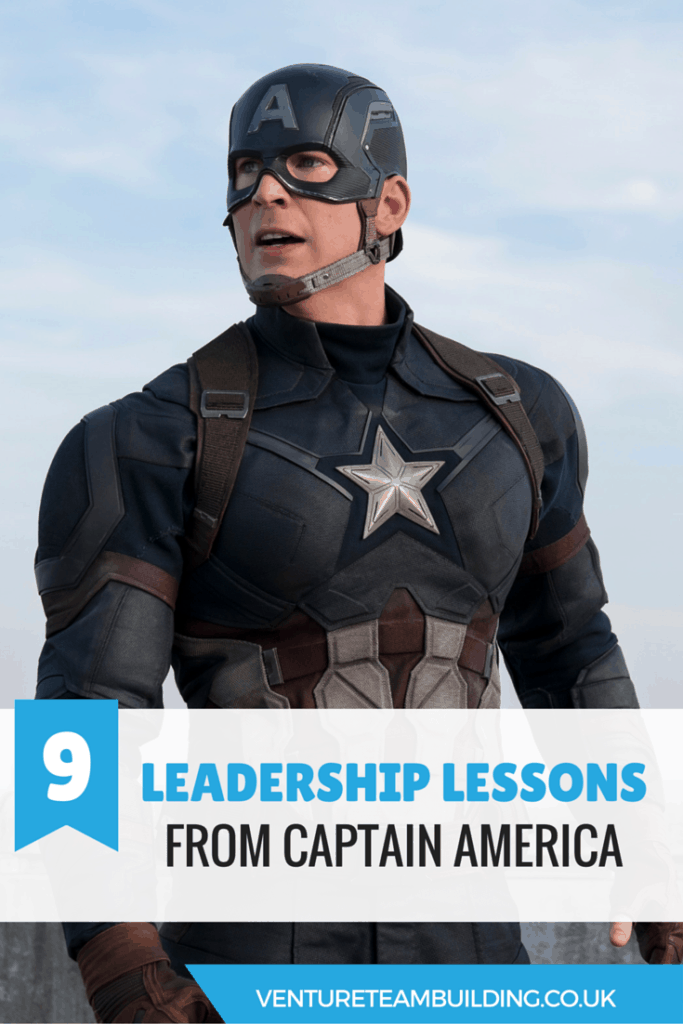 Full disclosure: I am 1000% #TeamCap and Captain America is my favourite Avenger in the Marvel Cinematic Universe (MCU). It’s been over a month since Captain America: Civil War was released and it still blows my mind how good it is and how much I loved Cap in it. It made me revisit the previous movies in the MCU and it struck me (not for the first time) what an extraordinary leader Cap is.

Yes, he’s a superhero but it’s his human qualities that make him great.

Here are 9 leadership lessons we can learn from Captain America.

(Caution: spoilers ahead!) (But if you haven’t watched any of the Captain America movies, why haven’t you?? Do it now!)

1. He has integrity and strong convictions, and he doesn’t compromise them.

One of the best things about Steve Rogers is his moral code. In Captain America: The First Avenger, he repeatedly tries to enlist to fight in World War II despite being rejected multiple times. When asked why, he says, “I don’t like bullies” and he thinks that it’s his duty to fight in the war. His belief in doing what is right and just, even when things are tough, is the cornerstone of his character.

Having integrity sounds like a boring personality trait for a movie character, but it’s exactly what draws other characters to him and inspires them to follow his lead. His convictions about freedom and justice help guide his decision-making and provides direction for his leadership.

And he doesn’t waver when it comes to his convictions.

How you can be like Steve: Having integrity as a leader builds trust between you and your team. Interact and communicate honestly with your team members, even in difficult situations. If you have a vision for your team or organization, share it with them and make sure that your words and actions are in line with your vision.

2. But he’s not afraid or unwilling to admit it when he’s wrong.

It’s one thing to have integrity and strong convictions, but if you’re stubborn and unable or unwilling to accept criticism, you will lose the respect of your team. Cap’s ability to admit when he’s wrong is what makes him likeable and makes you respect him as a leader. He’s not stubborn or unable to bend.

In Captain America: Civil War, Cap drops his shield at the end of the movie. It’s one of my favourite scenes (and stomped on my already broken heart), and there are so many meanings you can assign to that one action. For one, it can be perceived as Cap’s acknowledgement that he was wrong about not telling Tony the truth about his parents’ deaths. 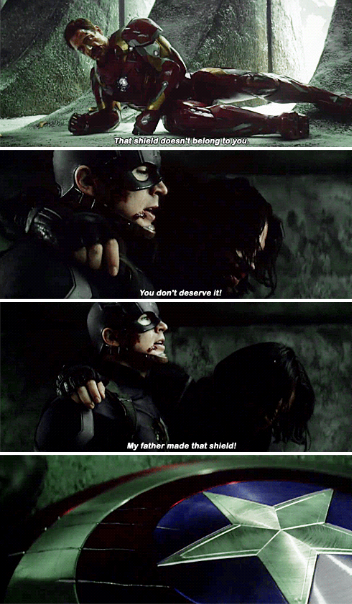 Along with his letter to Tony, these are examples of how Cap isn’t afraid to take the blame when he’s wrong. In fact, he’s man enough to admit it and extend an olive branch.

How you can be like Steve: Don’t be a leader who shifts the blame or avoids responsibility. If you’ve made a decision and it turned out to be a wrong one, acknowledge your mistake and learn from it. Your teammates will respect you for it.

The core of Cap’s stance in Civil War is his belief in people, not processes or institutions.

Later in the movie, when Steve is close to compromising with Tony on the Accords, finding out that Tony put Wanda on house arrest is what puts him off. In fact, Cap’s relationship with Wanda is a great example of how he puts people first. When, in Civil War, Secretary Ross is showing the video of the destruction and casualties caused by the Avengers, it is Cap who puts a stop to it when he notices Wanda’s reaction to the footage of Lagos.

Whether it’s minimizing civilian casualties in the attacks in New York and Sokovia or standing up for his team, Cap never forgets that it is people who matter.

How you can be like Steve: When you’re working in an organization, it’s easy to get caught up with agendas or office-politicking. Remember that people, both your employees and your customers, are the heart of your organization. As a leader, make decisions that put people first. You’ll find that not only will your workplace be happier, your customers will be too.

4. He inspires through action, not just through words.

Leaders are often accused of talking but not doing. But the best way to inspire your team is for you to do what you’re asking them to do.

That’s not to say that Cap doesn’t like a good rousing speech to fire up the troops.

You can use words to inspire, but follow it up with action to show that you mean it. Just like how Cap & Falcon followed up that speech in The Winter Soldier with some ass-kicking to stop the helicarriers from launching. (Spoiler alert: they took the helicarriers down.)

How you can be like Steve: Walk your talk. If you’re already shared your vision and goals with your team, then lead by example and act in ways that push you towards that vision. The best leaders lead from the front and what they do inspires their team. If you show your passion for a project, that energy will transfer itself to your teammates.

5. He plays to the strengths of his teammates.

In a well-functioning team, every member has his own strengths and weaknesses; a great leader knows how to leverage his team’s strengths to get the best results. In the final battle scene of The Avengers, Cap designs the plan for fighting the Chitauri alien invasion based on the strengths of each of the Avengers.

Cap displays this quality in all the fight scenes that he leads. Whether it’s the first fight scene on the ship, Lemurian Star, in The Winter Soldier or the now-famous airport fight sequence in Civil War, Cap knows how to best deploy his teammates to achieve his goals.

How you can be like Steve: An individual may not be well-rounded, but a team definitely can be! If you’re in the midst of building a team, ensure that each member brings a specific expertise that helps the group. If you already have a team, learn what each member is good at (and not good at!) so that you can effectively delegate tasks to those most suited to do them well.

6. He builds relationships with his teammates.

At the heart of leadership is building relationships with other people. Cap does a superb job at this. Whether it’s his teasing quips with Thor, quiet respect for Iron Man or his mentoring of Wanda, Steve excels at finding specific ways to connect with each of his teammates.

Just note how quickly he connects with Sam. Cap uses their shared military background as a way to quickly build rapport.

How to be like Steve: Get to know your team members. You don’t need a life-and-death situation like in the MCU movies to help bring a team together. Plan some team building activities if you need to, in order to build trust and improve communication. Learn what motivates them, what their strengths are, and what makes them happy at work.

7. He makes the tough calls when it’s required of him.

One of the most difficult things a leader has to do is make tough decisions. Cap doesn’t shy away from that. It’s Cap who tells Black Widow to close the portal at the end of The Avengers. You can see the regret and sadness about losing a teammate when making that decision, but he has weighed the situation and decided to do what was right in a tough situation.

Cap takes responsibility for a number of difficult decisions in the different movies. In The First Avenger, even before the super serum, he jumped on what he thought was a live grenade to save the lives of others. At the end of that movie, he made the choice to crash the plane into the sea to save New York. In The Winter Soldier, when it’s revealed that SHIELD had been infiltrated by Hydra, Cap had no qualms taking down the organization that he had been working for.

Cap is guided by his integrity and strong convictions when forced to make tough decisions.

How to be like Steve: Use your experience and best judgment to make difficult decisions. Your team will look to you for guidance and direction when things are tough so don’t shy away from taking responsibility.

8. He believes in the power of teamwork.

We love Cap best when he has a team behind him. Whether it’s the Howling Commandos in The First Avenger, Black Widow and Falcon in The Winter Soldier, the Avengers or #TeamCap in Civil War, Cap shines when he’s being a leader. It’s his belief in the power of teamwork that underpins his leadership success. He knows that as a team, they can achieve more than they would as individuals.

This clip doesn’t include the best part of that exchange:
Tony: “We’ll lose.”
Steve: “Then we’ll do that together too.”

Win or lose, Cap believes in doing it as a team. And that’s why the Howling Commandos were quick to join his team in The First Avenger and why #TeamCap was willing to go all out for him in Civil War. The reciprocity exists because they believe in his leadership.

How you can be like Steve: It may take time, but once you’ve got your team together and you’ve built bonds, put your trust in them. Trust that as a team you have the skills and tenacity to achieve your goals together.

A great leader never rests on his laurels; he’s always looking for ways to improve himself. One of my favourite things about Cap’s arc in the MCU is seeing how his fighting style has developed over the movies.

Compare this in The First Avenger:

to this, from The Winter Soldier:

Even though he’s already super strong thanks to the serum, this change in fighting style shows how Cap has taken the time to add more moves to his repertoire of skills. It makes him even more badass (i.e. more effective at what he does) and this, in turn, inspires his teammates as well.

How you can be like Steve: If there’s a skill you’re already good at, don’t be complacent. Instead find opportunities to further hone that skill. Leverage on your own skills as you would on your teammates’ so that the overall strength and effectiveness of your team increases. One thing you could do is read books on leadership.

The real secret to Captain America’s success as a leader is that he is himself. Take away the shield, take away the uniform, take away his title and at his core, he’s still the same scrawny Steven G. Rogers from Brooklyn. As Dr. Erksine said, the serum merely amplified what was already inside of him.

So be yourself, be authentic. Don’t let your title of ‘leader’ change you, but let it magnify your strengths. Be like Steve.

Are you #TeamCap too? Share with us why you think Cap is a great leader.

This site uses Akismet to reduce spam. Learn how your comment data is processed.

Get 30 of our best Team Building Activities ﻿in﻿ one PDF ﻿eBook!

I WANT THIS
x