You are at:Home»Blog»Team Building with Lego
By David Priestley on 17th March 2015 Blog

Using Lego for team building is a great choice for fun, engaging and creative challenges. We have around 2,000 Lego bricks in our arsenal and use them constantly when working children (and adults) for both tasks and reviewing.

Lego bricks can be used in a number of ways, but are great for communication based exercises and teamwork challenges that involve constructing a tower of sorts, often these builds lead to some impressive designs. 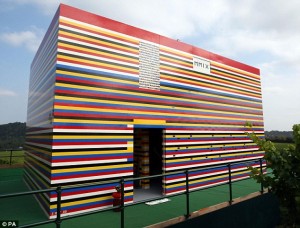 Did you know that Top Gear presenter James May built the world’s first full size Lego house (using 3.3 million bricks) in 2009 with 1,000 helpers – that takes some teamwork and dedication!

One of the advantages of Lego compared to other resources is that it can be de-constructed, so one team can take apart the work of a previous team and re-build on their own theme. This creates interesting opportunities when reviewing your workshops. What’s more, it’s small and you can take it anywhere… perfect for fitting inside your facilitation bags for your next teambuilding workshop.

Another advantage of Lego is that it’s fun to play. Lego is made in Denmark where it means ‘play well’.
You can be any age, as soon as you see you some Lego… you just want to build something. During our corporate programmes, delegates that haven’t played with it since they were kids get excited with the thought of reconnecting with their favourite toy growing up.The only problem we have found with Lego is keeping individuals on task and focussed – just make sure you brief the group before handing out the bricks.

Even if you’re a grown up, Lego is great fun!

You can purchase a 1kg Lego pack off eBay for under £30 – an absolutely bargain considering how much value you get out it (and it will last).

Give a challenge such as, ‘Sneak and Peak‘ a try with your team and see how you get on.

This site uses Akismet to reduce spam. Learn how your comment data is processed.

Get 30 of our best Team Building Activities ﻿in﻿ one PDF ﻿eBook!

I WANT THIS
x